Origins of the word “Hippie”

People react strongly to the word “hippie.” But what is a hippie exactly? What are the origins of hippie culture? 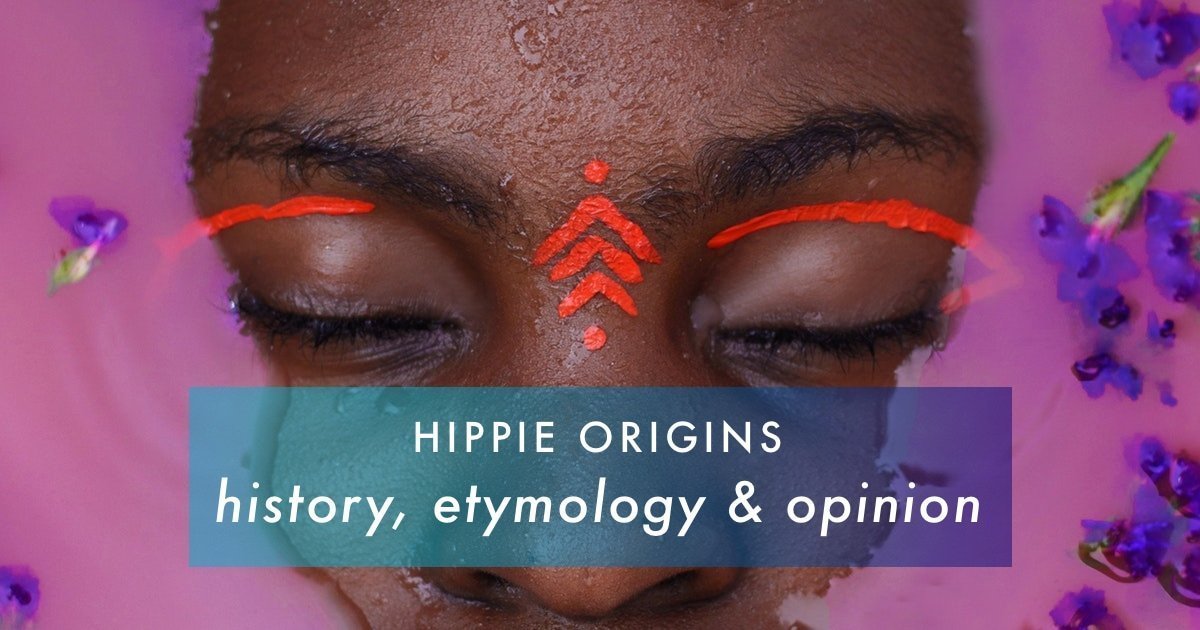 Guides are in-depth exploration of a new age topic. Check out other guides here. To get weekly nuggets on new age trends, sign up for the newsletter.

When gathering ideas for Hippiecritical, I ask this question to every new person I meet:

What comes to mind when you think of the word ‘hippie’?

I get a range of responses. The 60s, love, drugs (especially weed), freedom, and color came up a lot:

To me, I associate the word hippie with someone who is peaceful, insufferably spiritual, and dabbles in questionable lifestyle practices.

All of this is to say that there are a strong reactions to this word, and the definitions of hippie vary widely.

So I figured I should Google some things.

The etymology and quick history of hippies

I was surprised to learn that the root word hip meant someone who was “aware” and “in the know.” In Wolof, a Senegalese language, hipi means “to open one’s eyes.” (Wikipedia)

That’s a pretty good start for hippies. The origins of hip align to the theme of consciousness in today’s alternative communities.

In their early incarnations, hip, hippie and hipster were interchangeable. If someone called you these words between the 1930s and 1940s, it was a compliment meaning that you were sophisticated, fashionable and fully up-to-date. (Slate)

Then the 60s happened. A Cambrian explosion in the use hippie came about, thanks to political and cultural movements.

Today, if you search for the definition of hippies in Google, an incomplete picture comes up.

What I think is the more interesting story is that an entire hippie spectrum was borne from the 60s.

As hippies took part in political movements like anti-war protests, and cultural movements like Woodstock, their impact spread. At the same time, incumbents began to react against that impact. The meaning of hippie began to get stretched.

Depending on who you asked, the word could have positive or negative connotation.

How I Learned to Stop Judging and Start Loving the Hippies

Looking at the etymology, I started to develop a deeper understanding of what it means to be hippie. Who wouldn’t want to be more aware or in the know? Now I get why hippies call their festivals and practices “conscious.”

I revisited the exercise at the beginning of this article, and asked myself: what are all the things I consider hippie?

I generated dozens of topics, took the input from my Facebook friends, and attempted to categorize the topics:

Something dawned on me, looking at this spreadsheet. Hippies question everything, with alternative practices in every domain of life – health, sex, relationships, play, environmentalism, food, fashion…

Hippies have a strong streak of self reliance. They are anti-establishment innovators and nonconformists.

For better or worse, hippies challenge convention. On the best side, this can mean consciously not taking things at face value. Why do I need to buy more shit? Is this war worth fighting? They don’t take the default for granted.

On a darker extreme, the low trust of authority can also lead to anti-vaccination, flat-earth theories and wild government conspiracies.

From this expanded perspective, I’m left with a new appreciation for, and deep curiosity of, hippies.

I’ve long been fascinated by alternative thinkers. I eat up life hacking and productivity tips. I once considered creating a new blog called Question Default. I didn’t consider that my friends looked at me like how I used to look at hippies – eccentric and a bit weird.

Little did I know, all this time my curiosity was sitting adjacent to something I used to judge – my hippie side.

To talk about anything hippie is also to grapple with norms, conventions and my own comfort zone.

And grapple I will. Watch me explore hippie topics in podcast format a la Hippiecritical. There’s a sign up box thingy below if you want to know when it comes out.

“Every hippy is somebody’s square. And don’t you ever forget it.”

Join The Hippiecritical Newsletter and get weekly coverage on new age trends.